The Gheas: Our Eurasian Family

My Aunty Daph died on the 4th November 1990. She was my paternal grandmother’s sister. It was only then as a result of a conversation with some in my family soon after her death that I discovered that we were Chinese. That was the catalyst for starting my family history journey.

The Gheas have always fascinated me ... probably because of the Chinese and even the German. I would have expected English, Irish and Scottish ... but German and Chinese? How exotic!

I can still remember how delighted I was when I was first given a copy of this beautiful photo above of the whole Ghea family ... well not quite the whole family. Where was Great-Great-Grandfather Ghea? This photo is one of two taken on the same occasion. The other photo is taken with hats on. The dress would date the photos to the late 1920s or early 1930s and the hats would likely indicate a family wedding. Great-Great-Grandfather Ghea had died in 1918.

The head of the Ghea family was William Gee from Canton (Guangdong Province) China. Unlike Europeans the first Chinese weren’t recorded, or even regularly counted, as entering the Australian colonies so we don’t know exactly when he arrived. The first record we have for him is his marriage certificate.

What a surprise I got when I found the marriage! Not only was the spelling of Ghea different but the bride was the wrong person! By this stage I already knew that William had married Anna Elise ‘Annie Elizabeth’ Wieckhorst so was more than a little perplexed to see a different person on the certificate.

William and Annie were married on 28 April 1870 in Maryborough Queensland. William gave his details as being a bachelor from Canton China, his occupation as cook, his age as 28, his current address as Maryborough, his parents’ names as John Wong Sing and Ah Houn, and his father’s occupation as merchant. Annie gave her name as Katie Sharp and her details as being a spinster from Hamburg Germany, her occupation as domestic, her age as 19, her current address as Maryborough, her parents’ names as Peter Sharp (in reality Peter Wieckhorst) and Annie Wickhorst (in reality Annie Reinfahrt), and her father’s occupation as carpenter. Annie could sign her name but William could not sign his name in English. Witnesses were George Ernest Macrae and John Patrick Furey.

Annie was 16 at the time of the marriage and not 19 as she claimed. William’s age varies enormously across the different records that exist so we don't know his exact age. He may well have put his age down at the time of his marriage to appear closer in age to his bride.

One of the stories I heard when first beginning my search was that ‘Grandfather Ghea had to buy her (Annie)’. When I asked if that meant a dowry, the reply was that ‘No one wanted to marry a Chinese. They had to buy them (brides).’ I wondered if Annie had changed her name to disassociate herself from her father who had given her away as a 16 year old bride to a much older man.

In recent years another distant cousin revealed that their family story was that William and Annie had eloped. We know that Annie put her age up by 3 years for the marriage. At 16 she was too young to marry without written permission from a parent. This, together with the fact that no family member was a witness at the marriage, would point to the absence of family at the ceremony. The fact that Annie put her age up would indicate her consent to marrying William.  Additionally her mother had died a year prior to the marriage. It’s highly likely that Annie was in the role of housekeeper for her father and her two older brothers as well as the younger children. Was the prospect of running the household for years too much?

And where did the name Katie Sharp come from? I searched the passenger list from the ship that carried the Wieckhorsts to Australia and many other records but could not find any clue.

At any rate it is fair to assume that the marriage was a happy one. They had a large family and the marriage endured.

Nothing is complete in the world of family history these days until you have proven your DNA link to your forebears. I am happy to report that not only do I have 7% Chinese ethnicity but I have identified DNA matches with descendants of three of the 10 Ghea children as well as with a number of descendants of Annie Ghea nee Wieckhorst's grandparents. I can therefore claim the Gheas as part of my genetic family.

Note: Family history is a never ending story. If you find an error on this page or have anything new to contribute to this topic I would love to hear from you.

Please email me on Kathryn.Barrett02 at gmail.com 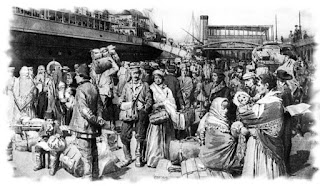